I’m managing my facebook exile pretty well. I’ve written four additional chapters for my original story in that time, the first draft anyway. I usually take a few days after to think about what I wrote (and go through some inner conflict tug of war over whether I like it or hate it.  At some point during my turmoil, the answer is both.  I’ll fix what didn’t work and move on.)

As you have probably worked out, my process is not that complicated.  The truth is- I’m not that deep.  And I like it that way.

While I work out the kinks in the original, I figure it’s time to get working on a much delayed update or two in FSOG fanfiction world.  That’s what’s on today’s menu anyway.

My Social Media Dom has allowed me a few minutes here and there to peek into facebook.  I hope he doesn’t get too used to his Dom status because those days are numbered. Soon I’ll be back to my well-deserved Queen of the Castle status.

While perusing my newsfeed, I’ve come to the conclusion that I haven’t missed much. In the few times I’ve peeked in, I’ve found that most  status’ are my fellow facebook friends bitching and moaning about snow. Granted, this part of the world has been dealing with a shitload of snow.  I’m not a fan of snow. Truthfully, I hate snow (yet, I enjoy shoveling snow… it burns away all the wine calories… and there’s a lot to burn).

Correction, I like pretty snow. The kind that sticks onto the trees and grassy surfaces, leaving the streets and sidewalks clear.  That has not occurred this winter.  We are getting pounded.  Three storms just this week.  It’s crazy. Mother Nature is really getting around…Snow Slut that she is.

When my daughter was in middle school, the eighth grade sponsored a day trip to the Pocono Mountains for some winter sports… skiing, snowboarding, tubing, all the outdoorsy cold winter fun activities I’d rather avoid.  Parents were encouraged to come along and participate.  Like many of us, I was an overprotective parent with visions of my daughter breaking her leg from a freak tubing accident, so I was on board.  Mind you, we were not chaperones; we were there to enjoy the joys of winter along with everyone else.

The kids were having a blast, decked out in eighty layers of coats, hats and scarves.  My daughter and her friend begged me to join them on the mountain.

Hello darling daughter….  Have you met me?

Fortunately, they were still young enough to believe that anything I told them was gospel.  Like a few other snow-hating mothers, I explained to them that I was staying behind at the ski lodge in case someone was injured and needed help.  I’m so selfless, such a giver.  Satisfied with that excuse, the girls scampered back to the frigid mountain, while I and all the other selfless parents waited patiently in the ski lodge.

Here’s what our kids thought we were doing:

Needless to say, we made the best of the day (and slept it off on the bus ride home… Good Times).

A few years ago, we were hammered with a bitch of a blizzard. This is a worst case scenario for a snow hater like me.  It’s not pretty snow.  It’s snow that keeps you locked up in your house for days with nothing else to do but eat and deal with bored kids.

I read somewhere that it’s practically impossible to look at a penguin and feel angry.  You can’t argue with that logic.  Think of a penguin right now…you’re happy right?   You can’t help yourself, can you?

Meet Paulie the Penguin.  He belongs to our neighbors. We steal it off their porch every Christmas and return it in July. Paulie was about to make this blizzard tolerable.

We placed him on a table outside and let Paulie and Mother Nature entertain us.

5:00 pm…Things are starting to suck for Paulie:

7:00 pm.  Paulie is experiencing numbness on his face.  Meanwhile, I’m warm and toasty with a  glass of chilled Pinot Grigio:

9:00.  Lucky for Paulie, penguin balls are internal.  Now that it’s dark outside, he’s lit up for our viewing pleasure: 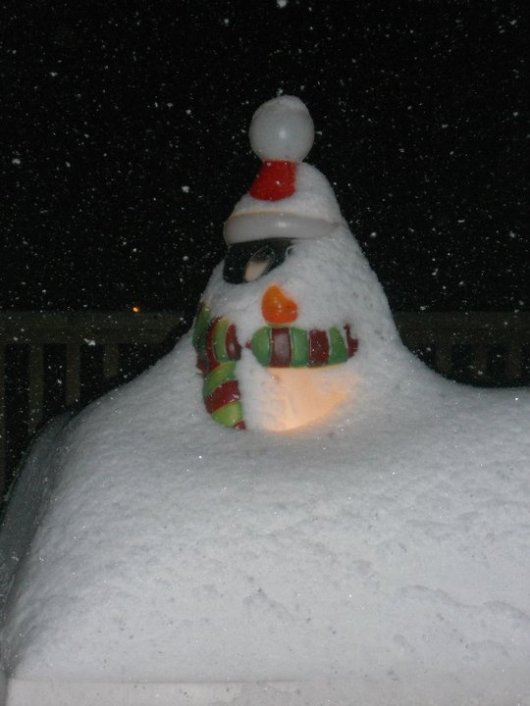 8 am.  My ruler said a gazzilion inches of snow fell that day.  Not a good day to be a plastic penguin. Paulie entombed:

9 am.  Paulie carved out of his snowy tomb:

Later that day…. No Penguins were hurt in this experiment:

So, there ya go. My solution to beating the “You’ve got to be kidding me…It’s going to snow again?” blues.

I hope you enjoyed Paulie as much as we do. It’s the only FU I can give to Mother Nature… make the misery she sprinkles upon us… entertaining.

It’s time for me to get writing, so adios until next time.

Stay safe out there.

The Casual Rule – Available on Amazon.com

99¢ SALE for All the Christmas Feels!*Update: Sale has Ended**

Friday is the LAST DAY!

The Story Behind the Words

The First Snowman Teaser is Here!

The Casual Wedding is LIVE!